The history of food is closely linked to that of humanity and migration. First of all, because climate change and the consequent food insecurity are among the most common causes of migration, but also food expresses the relationship with countries of origin and, at the same time, it is a source of meeting and knowledge with the host society.

The cohesion between compatriots is strengthen through food and “ritual meals” consumed together, also the way of eating (with hands, around a single plate, with chopsticks …) can play the same function.

Local food and drink act as a “marker” of identity, as a factor of internal identification in a group. But food is also a vehicle of interaction with the host society, in fact through its consumption, its socialization will fire the communication and a socio-cultural exchange and it becomes a way of “talking about himself to others.”

The “Parlez-vous global?” Project deals with global education through the issue of migration and, for this reason, has chosen Milan Expo2015 as a place to host its International Forum.

The International Forum “Migration and global citizenship in schools” took place on October 9th In Cascina Triulza, hall of the Civil Society in Expo2015. It was attended by 150 teachers of secondary school of 7 countries (4 European countries – Italy, France, Austria, Romania – and 3 African countries – Benin, Burkina Faso and Senegal).

Volunteers of the Media Center of EAThink2015 have not stepped up the opportunity and they have attended the event covering it on social media, making video interviews and taking photos . 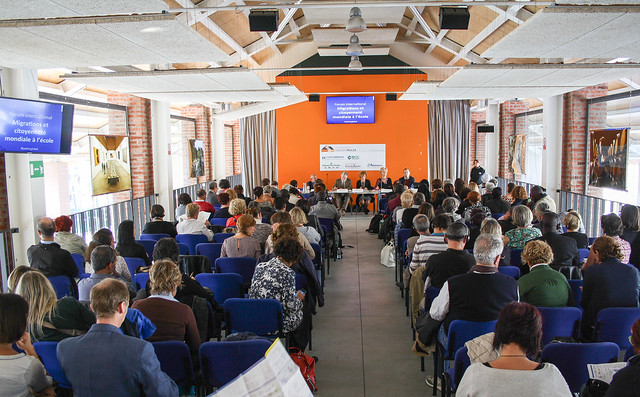 Here the valuable work Volunteers: “Parlez-vous global?” What does it mean to speak global at school? We asked it to the 150 teachers at the International Forum “Migration and global citizenship in schools”: