In the Zero Pavilion, an entire section is dedicated to the “culture of conservation“: the association of the two words is enlightening, it gives the idea of how rooted in human reality, in his thought and gesture. The act of storing is a cultural act, is part of every culture, diversified in myriad forms, but with universal purposes. Keep, preserve, protect, convey, exchange, share: there are many synonyms of conservation. Often, the etymology helps explain the intrinsic meaning of a word: storing expresses the idea of “saving“, through a medium, an object or a set of specific techniques. The purpose is physical slowing or shutdown of the vital processes of a stuff, not treated originally, in such a way as to maintain its properties and non-marring its natural state, its freshness. From this comes the ability to carry and use such product even at a distance,of time and place.

The storing method is diversified by the tools used. Generally, they could be physical (cold, heat, dehydration, inert gases, radiations ) or chemical (natural or artificial materials: the most famous, and used one, the sodium chloride).

Even the first human communities had intended how crucial was to keep its products and liquids that were their livelihood, in order to collect, use and share. In the Zero Pavilion section dedicated to the conservation, are exposed tools from different societies and times, made from natural materials and equipped with the most varied forms; symbols of ingenuity, practicality and creativity.
Industrialization and more generally the scientific and economic progress have also invested retention processes. In 2050 the world population will exceed 9 billion, it will be necessary to improve the storing techniques globally, in order to feed all. Keeping also means not wasting, not disperse: the process becomes problematic when it is inefficient, or spoiled.

The modern food industry ensures that this does not happen, though not worldwide efficiency level is equal. Often, the countries with economic difficulties have to face the question of proper storage, that makes it difficult to respect the food security standards dictated by developed countries, to land in the international trade.

Angola is one of the most promising economies in transition in Africa, especially in recent years, and its Pavilion in Expo 2015 celebrates it. The food industry stands out for upgrades and activated controls. The African country draws a direct line between the traditional conservation tools ( like the “ngyendo”, a basket of natural fibers to transport products or a classical “pumpkin-like” container for water) and the modern conservation and storage facilities, as industrial metal silos for cereals or smoke systems. Angola shows the importance of ethnographic and cultural heritage represented by traditional instruments, modern and eternal source examples of human ingenuity. Secondly, it recognizes the renewed efficiency of the industrial system, which may have beneficial and constant effects on economic conditions and living standards, as well as projecting its economy into the global panorama. 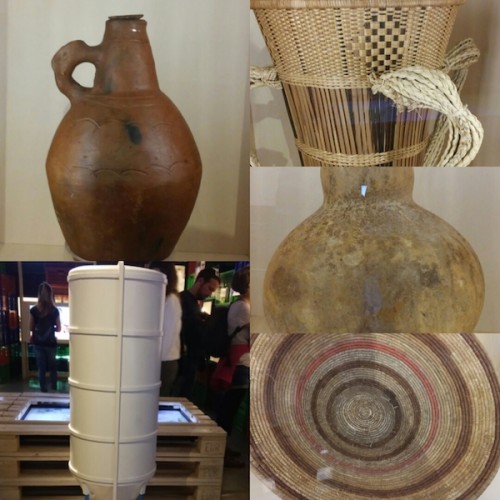 Another place where tradition connects ingeniously to actuality, and, in this case, innovation, is the futuristic Pavilion of South Korea. Fermentation is the Korean proposal to a global need for improvement of the techniques of conservation and distribution of food. It is a natural chemical process, which, through the deprivation of oxygen, develops vitamins and lactic acid, “good” bacteria (lactobacilli) for our health. Formerly, the procedure consisted of pickled vegetables inside earthenware jars (“onggi”). The food put through this kind of process is called “kimchi”. The severe winter conditions of Korea restrict the availability of fresh vegetables; the kimchi practice takes place in the autumn, so the content can be consumed later. The Korean tradition is distinguished from other similar as it includes a great variety of ingredients like meat and seafood, besides the famous kohlrabi or other vegetables.

The answer to the well-known question “How to feed the planet?” for Korea is the spread of kimchi worldwide, according to the principles of sustainability and respect for seasonality, to zoom out, on the one hand, the level of malnutrition and, on the other hand, solve the huge food waste.

It is a remarkable fact that some countries have decided to make the theme of food preservation in its halls, as a sign of change and innovation.

Store means thinking collectively, from a small nucleus like that familiar to larger communities, thinking about the globality of the “burden sharing” issue and the different weights of the North and the South of the world: the first one fighting the waste, the second seeking to preserve and not disperse his thriving production. From a small jar containing water to a modern industrial process, the concept is still the same, humanly important: making everything possible and equal, to all, without distinction.

Written and translated into English by Camilla Marchetti.