Fifteen years ago, in 2000, the United Nations State Members established 8 Millennium Development Goals to reach by 2015.

Fight HIV/AIDS, malaria and other diseases

Develop a global partnership for development

Some objectives were achieved, while some others are still far from being satisfied. Today, the time has come/at the end of the scheduled time, another global challenge is being raised.

On these days, New York’s holding the World Summit on Sustainable Development : today, 193 state members and more than 150 world leaders adopted officially the Agenda 2030. This new document embodies the Sustainable Development Goals to be achieved by 2030. The original 8 purposes became the current 17, more complex and structured, but most importantly sustainable, because now the attention is focused on the root causes of poverty, inequality and environmental degradation, not just on the symptoms.

The new agenda recognizes the huge global challenges, from the systemic poverty, to the social inequality increase, the bad distribution of richness and resources, the environmental degradation and the severe risks of the climate change. The environmental issues become governments’ priorities for the next 15 years. “It’s the largest world assembly we’ve ever seen, because the challenges we have to face are more urgent than ever” declared Yolanda Kakabadse, WWF International president, “countries are reunited to recognize, at last, that the health of economy, environment and people are deeply connected and dependent”. (Source: Adnkronos)

“We set out ambitious goals and now we have to work to make them real”, said the UN Secretary General. “No one will be left over” is the bon mot that summarizes the essence of this universal task, all the countries will be key players and they will be urged to realize the local policies, according to and supporting the new Goals. While the MDGs were thought for the developing countries, the SDGs concern all the countries in the world and the rich countries’ impact, big resources consumers, on the development and wellness of the other states. The world relocates from the traditional North-South discrepancy to a universal development project. The partnership will be set at an international level and even among the different civil society actors: collaboration from all will be fundamental to succeed. Governments, Private Sector and Civil Society will be due to work together, for the common good.

5 million of people coming from 88 countries defined the priorities for the future of the world, sharing their vision of the planet in 2030. Three years debates and negotiations led to what Ban Ki Moon described as the “most transparent and inclusive participative process in the history of the United Nations”

Here are the results of the world survey and the most voted Goals that have been included in the Agenda 2030 (Source: United Nation) 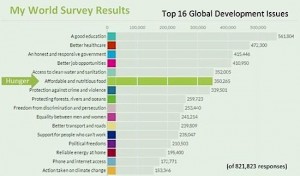