Day 1
In September 2015, as the first price of the photo competition of EAThink project founded by the EU we got the chance to go to Milan where among others we could visit the World Expo. We were happy that we could start the school year with something less ordinary: with travelling

We left early Friday morning, and after we landed, even at the airport we saw the ads of the Expo wherever we looked.

We took the train into the city centre, but as we could only check into our hostel in the afternoon, we had some time to kill. Nobody wanted a too intensive program, because we all were exhausted. We visited the castle of the Sforza family, where Andris explained us all the interesting facts about the building, before we settled down in the castle-park. We have been sitting there for a while, when we noticed that a guy, probably in his early twenties is drawing a picture of us. Some of the girls started chatting with him and listened to his life story. In the evening we had dinner in a small Italian restaurant, than we checked into the hostel. We watched the Hungarian-Romanian football match on our smartphone, than we went to bed around midnight.

We got up early on the second day as well. We had an appointment to see the Last Supper, the  famous fresco of Leonardo Da Vinci. Our teacher, Mr Gedeon told us about its story. After quarter of an hour we had to move on to our next destination, the EXPO.

Getting of the underground we were shocked by the amount of people waiting on line. However that was nothing compared to the crowd inside the EXPO itself. Thousands of people were walking on the 1.5 kilometers long ‘high street’ and as we could see on our maps, there were plenty of buildings as well. Our hosts led us to the building of the Italian organizers’ (ACRA). The winner photos (including ours) were the parts of a small exhibition there. Following our hosts’ recommendations first we visited the Tree of Life in the heart of the exposition. We had our lunch there and after that we got free time to explore the place in little groups. Naturally the first pavilion we visited was the Hungarian, which against all expectations was quite nice. As a benchmark we had a look at neighbor buildings like Slovakian or Romanian. It was almost impossible to get in the pavilions of bigger countries, so we mostly visited the smaller ones’. The only big building we managed to enter was the Russian. Then we all gathered and Dávid began to film the interviews.

We all agreed on staying late, so we can see the EXPO by night. Then we found out how much easier it was to use the bus to get from one building to another. Again we visited some pavilions, this time the Spain, Vatican, Iran, Monaco and our favorite: Turkmenistan. In the USA we could watch short movies about food. In other places they were presenting ancient food producing traditions, fair trade in connection with cocoa and coffee and the concern of water shortage in Africa. There were also a place called ‘The supermarket of the future’. 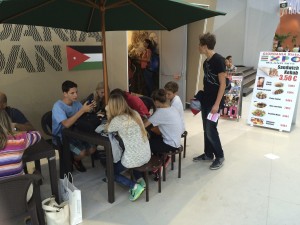 We ate kebab for dinner in the Middle East section. When the sun set we had a look at the Chinese building, which had really beautiful lights. At 10 in the evening we all met by the Tree of Life where we could watch the spectacular show combining fireworks, lights, fountains and music.

Our day in the EXPO came to an end, we left for home.

All in all we found the EXPO stunning, but also a waste of money. Only a few countries mentioned the concern of sustaining food systems. It is more of the propagation of the countries taking part. Also food is incredibly expensive there and you cannot take in your own. However there are drinking taps installed all over the place and that is really nice.

Anyhow it is certainly beneficial for Milan and its tourism.

In the dawn when we got up, we had the not so perfect Italian breakfast with shameful amount of Nutella. Although the early waking we still had to hurry to see the ‘The last supper’. We could enjoy the benefits of the great underground system of Milan, and travel through the city. At the monastery we had 15 minutes to admire the painting. It was in surprisingly good condition, but we were really surprised by those who craved a door in the place of Jesus’s legs. 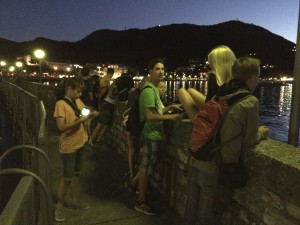 After it we had to hurry for the train station to catch the train witch took us to Lake Como. The double decker trains were really comfortable, fast and silent. When we arrived it was just about time to lunch. The restaurant were we ate was the best by far, comparing to those we had before. They had really tasty pizzas, and huge delicious hamburgers.

After the lunch some of us prepared with presentations about the Lake, and the area. There we had an hour of chilling time, before we went up to the mountain by the funicular. At the station we saw another hill that we could climb, and we thought why not, we like to hike… The time we got to the  top, it the sun was setting, and we saw the most beautiful sunset that anyone could ever see. Behind us there was a small church, and we could see how the sun disappears behind the alps, and lights the valley and the lake with warm colors. Shortly after the sunset we headed back to the town and had a nice half-hour walk in the center. We took the train back to Milan and it was about midnight when we arrived at the hostel.

We packed up and we left our bags in the guesthouse. We went to the Dome with subway. The sightseeing started from there. The students of the Italian Tourism High School gave a presentation about the centre of the city. It was two hours long. 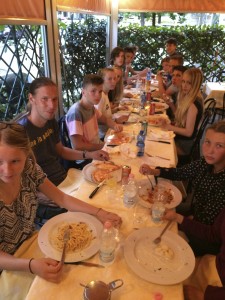 The sightseeing ended in the square next to the Dome. After that we bought tickets into the Dome in groups. It was very huge and beautiful. That was 1 or 2 hour free time in the city. We bought some souvenirs and we went to the park of the castle where we met Mr. Gedeon. We travelled by a subway number 5 (without a driver) to the San Siro stadium. It was spacious and very nice. It has more than 15 gates.

Later we went back to the guesthouse and we had dinner in a little Italian restaurant(with our bags). After we ate our „last supper”, we went to the airport quickly. There wasn’t any problem with the flight; maybe the stewardesses were quite tired. At night (12 p.m.) we successfully arrived to Budapest.

We enjoyed the whole journey and we think we want to go back sometime. We are still under the effect of the experiences.