On Sunday 24th May, Kopin took part in the WorldFest 2015 event organised at the Upper Barrakka Gardens in Valletta with a dedicated stall offering theme-related activities to the visitors.

The World Fest is a yearly event organised by Maltese Fair Trade Cooperative (Koperattiva Kummerċ Ġust) to promote Fair Trade and ethical consumption. Ethical organisations and businesses from around Malta participated by linking their work to this year’s theme: ‘Food’. A number of workshops and panel discussions were held addressing the topics of organic production, sustainability and upcycling; stalls selling Fair Trade products and food from other regions of the world were present and the event, which ended with a concert featuring a number of local bands.

Kopin’s team of staff members and volunteers offered a series of activities throughout the day, aimed at raising awareness among the general public – children, youths and adults alike – about the links between food production, consumption patterns, development and human rights, as well as the importance of sustainability and a conscious use of resources in food production within the different existing systems and the role of Fair Trade actors in ensuring the quality of products and the respect of workers’ rights worldwide. 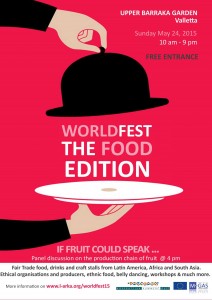 During the event, Kopin also promoted a number of initiatives that are currently being implemented with a focus on topics such as food security, alternative food systems, sustainable production, climate change and small-scale farming, specifically the EAThink 2015 and the ClimATE Change projects.

For more information on current and future initiatives of Kopin related to the above-mentioned themes, please contact us at eathink@kopin.org or +356 27567460.